Between 1953 and 1965, the Dutch War Graves Foundation created twelve military cemeteries in Europe, for Dutch victims of the Second World War, including the Orry-la-Ville military cemetery in France, which was inaugurated on May 3 1958. Due to maintenance cutbacks, the quality of the greenery had deteriorated significantly over the years, which meant that a major renovation became necessary. The Dutch garden and landscape architect John Todirijo was commissioned to create a plan through which symmetry, rest and dignity would be returned to the military cemetery and the maintenance of the planting would be simplified. This resulted in a detailed revitalisation plan with clear structures, increased breadth and depth and protected, enclosed places. Trees that had a place in the original 1956 design but had disappeared over time were reinstated.

The final planting plan for Orry-la-Ville was drawn up in cooperation with Ebben Nurseries and Hoek Gardeners. In and around the cemetery, hedges, shrubs and plants were dug up and more than twenty trees were felled. The soil quality, which left a lot to be desired, was also improved. The trees in the surrounding, protected forest underwent careful pruning to bring light and air back to the cemetery. Large trees, shrubs and perennials were then planted at the cemetery. The main structures were created using neat, evergreen box hedges. Multi-stem dogwoods, ornamental cherries and magnolias bring a seasonal experience through blossom and autumn colours, whilst red-leaved Dawyck beeches form stately elements. Thanks to the careful choice of planting, this military cemetery was returned to its former glory. 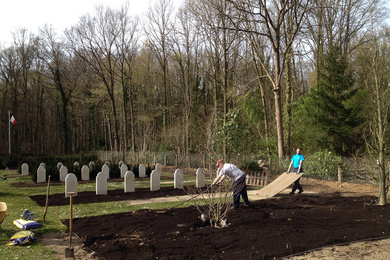 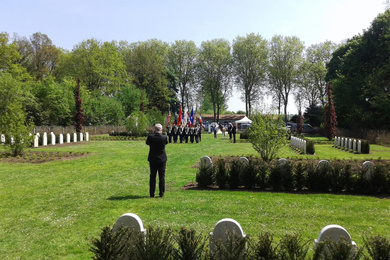 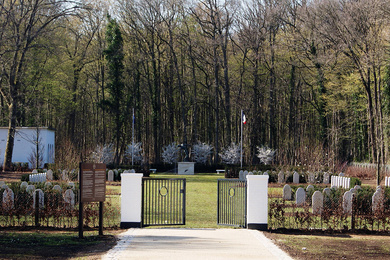